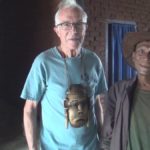 Pete visited this fascinating part of India in early 2019. The video travelogue begins in Kolkata (Calcutta), the “City of Joy” which had been the colonial capital when India was a British colony.

From there he travels into three of the northeastern states of India which border Tibet (China) and Myanmar. There are a hundred different Indigenous tribes in this portion of India. They are mainly of Tibetan and Burmese origin.

Starting in the state of Arunachal Pradesh which is in the jungle and foothills of the Himalayan mountains. Here Pete is among the first tourists to visit some of the villages.

Then into the state of Nagaland which is the home of a headhunter tribe. This gruesome practice continued till the government made them stop in 1960. On the border with Myanmar, Pete visited an opium den, (but didn’t partake!)

Continuing his journey, he enters the state of Assam with its vast tea and rice plantations. It is bisected by the mighty Brahmaputra River with a visit to the park inhabited by the one-horned Rhinoceros and wild Elephants.

Pete ends his tour with the colorful festival of Holi at a Hindu temple in Guwahati. There were many numerous interesting, impromptu stops throughout the tour that are included in the video travelogue.

At the request of the speaker, please wear a mask. Masks & sanitizer is available at the library. The program is free to attend & open to the public. Light refreshments will be served. As a courtesy to our speaker, please arrive at least 5 minutes early. For more info, please contact the library at (208-347-3147).

@ Meadows Valley Public Library Stories from The Far North - Wednesday, January 12th from 3:15 to 4:00pm At our Stories from the Far North Story Time we will read a couple books, make some fun Bear Magnet crafts and have a treat! Upcoming Story … END_OF_DOCUMENT_TOKEN_TO_BE_REPLACED